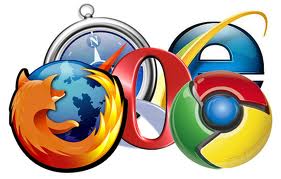 Why on earth does anyone still use Internet Explorer (IE)? I have asked myself this question time and time again. Why in the age of Smart Phones, flat screen TV’s, Xbox Kinect, funny cat videos, and Facebook, would someone still be using IE when there are so many other choices? According to this article written by Steven J. Vaughan-Nichols, IE falls short on Web Browser safety. He cites an example of the Koobface (a worm that affects Myspace and Facebook users) attack and states that users of IE were the hardest hit. So why do people still continue to use IE? Some point to a lack of knowledge (I am putting this nicely btw), or lack of being tech savvy. I like this line from Cracked.com, “Internet Explorer is kind of like the Budweiser of the web browsers. It’s the most common and always “selected” out of fear or ignorance.” Personally I agree with Cracked, I think it’s because people just don’t know what else is out there or the ability browsers such as Chrome, Firefox, or others have. If someone has a Windows OS, their default browser is IE. It does take them to the websites they want to go, so what’s the problem right? The problem is IE is slow, uses more memory, and most importantly it makes things so much harder for the developers out there trying to make awesome applications and websites. Some of the tools needed to make sites look pretty and user friendly cannot even be done in IE. I could be wrong but isn’t this usually what the client is worried about? And anyone using IE 6 stop, stop right now – this is not just me asking, but http://www.ie6countdown.com/ – Microsoft.

I understand in some corporate environments workers are forced to use IE or maybe someone using a public computer doesn’t have permissions to install applications. However, there are ways around it. You can download an extension http://code.google.com/chrome/chromeframe/ for IE which allows you to view pages as if you were using Chrome. Although, if you have the permission to install applications (ie: you are using your personal computer) why not download a better, more user friendly, FREE web browser, and that DOES follow web standards! So make the developer’s and your life easier and make the switch now! When I asked our team here at Ayoka what browser(s) they use, most of them said Firefox and Chrome or both. And here are some quotes about why they use these browsers over IE. And you are probably wondering which browser I prefer. I use Firefox, mainly because I don’t want people to think I am dumb…

“I use Firefox for its extensibility and tools. Chrome for its simplicity, resources management, and extensions. Both browsers make upgrading seamless and easy, and users of these browsers tend to keep them updated.”

“I use Chrome because I find it is very user friendly.”

“I use Firefox and Chrome. I like the way the browsers look and that I can customize my navigation. I get a kick out of using on IE on a clean system to download and install FF and Chrome.”

“I use Google’s Chrome. It’s fast safe and it has lots of add-ons like, Remote Desktop, Google Voice, and other plugins needed for development

“I use Firefox. Firefox is what IE should be. It’s fast, reliable and is always making advancements much faster than Microsoft (as well as fixing bugs). IE is always slow and clunky and ugly.”

The Internet is everywhere, and everything’s on the Internet. At least, this is what consumers believe. Without an online presence, your business misses a significant portion of your target market and loses sales. Even if you have a limited Internet presence, such as a static website, you are not engaging with consumers in the way they have come to expect. That alone is reason to consider custom software development. END_OF_DOCUMENT_TOKEN_TO_BE_REPLACED

Read More How Custom Made Web Applications Can Grow Your Business

Patients Know Best (PKB) is a network for patient health record (PHR) practitioners.  PKB wanted a web-based application that will allow individuals to retrieve knowledge about their patient records through…

Since the Clean Air Act's induction in 1963 under President Johnson, it has been up to the Environmental Protection Agency (EPA) to research, create, and enforce regulations that protect humans…